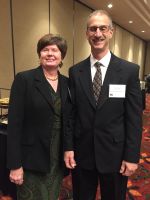 Gary Weisner, a trades specialist II on the Wheeling campus of West Virginia Northern Community College, says he acquired a love for building and repairing at a young age from his grandfather, father and brothers. His expertise and dedication has earned him the designation of WVNCC’s Outstanding Community College Contributor for 2015-16.

A Wheeling resident, Weisner received the accolade during the annual conference of the West Virginia Community College Association held Nov. 11-13 in Charleston. At Northern, Weisner’s expertise in all facets of maintenance, combined with his positive attitude and willingness to work collegially with all constituents, were cited by those nominating him for the distinction.

“By effectively utilizing his time and talents, Mr. Weisner’s efforts have led to about $150,000 in cost savings for the college,” his nominator said. “He leads by example. He willingly assumes the role of mentor to his peers in maintenance by sharing his knowledge and expertise in an unassuming, professional and courteous manner.”

Weisner “consistently exhibits a helpful, positive and caring attitude” and is a “fine example of a person who combines strong skills and a positive attitude, both of which have enhanced the maintenance efforts” at the college.

The WVNCC honoree’s first official maintenance job began in 1988 at West Liberty State College where he spent the next 25 years in the Maintenance Department. While there he obtained a Journeyman Electrician License and several other certificates.

In 1992 he became a West Virginia Northern student and earned an associate degree in refrigeration, air conditioning and heating along with two one-year certificates in maintenance technology and appliance repair. He transferred to West Liberty, ultimately graduating with a bachelor’s degree in 2002. Weisner became assistant director of the physical plant at West Liberty before joining WVNCC as an electrician in the maintenance department.

Weisner also steadily volunteers for community service, becoming active in the Bethlehem Volunteer Fire Department where he held the assistant fire chief position for more than 10 years. He has volunteered for Habitat for Humanity where he helped to build a three-bedroom home from the ground up in just seven months. In addition, he was instrumental in building of the Heritage Port Playground by the Junior League. He also served as construction coordinator for the Wheeling playground.