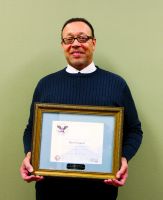 Darryl Clausell, long-time volunteer in the Wheeling area who is the coordinator, Continuing and Community Education at West Virginia Northern Community College, has been designated as a “Drum Major for Service” and honored with the Presidential Volunteer Service Award from President Barack Obama.

According to YSS, Clausell has been instrumental in assisting with site recruitment, community outreach and education and general program support. Because of his outstanding dedication to the local program, he was chosen to serve as the chairperson for the Youth Services System Safe Place Advisory Committee.

He also was chosen to represent YSS on the National Safe Place Advisory Board. Last fall, he was instrumental in the planning and implementation of an event to raise money and awareness of runaway homeless youth, the first Wheeling SleepOut.

According to the YSS nomination, Clausell “has demonstrated an unwavering commitment to our agency and the Safe Place program. He serves with a smile and an abiding faith that is an inspiration to many.”

In addition to his work with YSS, Clausell is president of the Upper Ohio Valley NAACP. He is a past chair of the Martin Luther King Committee. He is an active member of the Macedonia Baptist Church, with the choir, as chairman of the finance committee and church treasurer. He also transports youngsters to Sunday school classes every Sunday morning.

The YSS nominators said, “He would be the first to point out that these titles do not outweigh his spirituality, faith and knowledge of who is first in his life.”

Clausell, who was elected to the Youth Services System Board of Directors on Jan. 18 of this year, thanked YSS for the honor, saying his feeling as a volunteer is that “you don’t talk about what you do, you just ‘do’. A lot of volunteers are never recognized, and I am grateful.”

The Martin Luther King Drum Majors for Service program gives organizations and groups an opportunity to acknowledge and celebrate those volunteers who perform extraordinary everyday acts of service with reliability and commitment, but who seldom receive recognition.

In his signed letter to Clausell, President Obama said, in part, “Your volunteer service demonstrates the kind of commitment to your community that moves America a step closer to its great promise.”