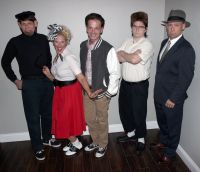 Mix together the 1950s, the Soviets, UFOs, beatniks, a sock hop---and a murder---and what you get is hilarious fun as the New Martinsville Campus Friends of the College at West Virginia Northern Community College presents its second annual fund-raising event Oct. 24 at the Mollohan Center.

“Johnny B. Dead,” a murder mystery dinner theater production from Mystery Theatre Unlimited and cosponsored by the WVNCC Foundation, will be performed at the New Martinsville facility from 6:30-9:30 p.m., with doors opening at 6. The show, an all-new, original interactive musical comedy production, is the 44th written by local playwrights Bert Furioli and Butch Maxwell.

A home-style dinner prepared by Shooters Saloon and Catering of Reader will be served, ending with a root beer float/sundae bar for dessert. Other festivities for the evening include wine tastings, raffle baskets, photo settings and door prizes. Audience members may want to come dressed in their best ‘50s attire. Proceeds will provide scholarships and other support to students attending the New Martinsville campus.

In the show, students at a high school in 1957 face scrutiny from a federal government investigator on the trail of top secret information apparently being leaked to the Soviet Union.

The action centers on a typical American teenager, Johnny Armstrong (portrayed by Maxwell,) who has wanted to be a government investigator ever since he saw the landing of an unidentified flying object that he is convinced was flown by aliens from another planet. He is so focused on his career objective that he barely notices that a classmate of his, Joanie Chachi (played by Renee Zelinski,) wants desperately to be his girlfriend.

All of the action leads up to a sock hop and the unexplained murder of one of the characters. Along the way, there are lots of laughs and musical parodies of classic 1950s popular songs. In fact, “Johnny B. Dead” offers more musical parodies than any previous Mystery Theatre Unlimited production.

The Wheeling-based ensemble has been writing and performing original comedy murder mysteries since 1996. The performances include audience interaction and the opportunity to solve a murder mystery, along with a full dinner. Performances take place in a dining room, with actors moving among the tables. In addition to the option to play small parts in the show and to question characters, audience members are encouraged to gather and share clues.