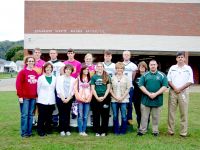 The Paden City Boosters Association once again has approved funds for a project that will improve the academic status of the high school students it supports, this time by paying for courses taken through West Virginia Northern Community College.

Kathi Ferrebee, treasurer of the boosters association, said, “As we embark on this new endeavor, please know that we are excited to once again be of assistance to our children in Paden City.” Ferrebee explained the boosters will pay all costs associated with Early Entrance courses offered by the WVNCC New Martinsville campus, “with the stipulation that they must pass the course with a C. Anything less will not be paid for by the boosters because the credits will not transfer to another college.”

Larry Tackett, dean of the New Martinsville campus, expressed his deep appreciation for the boosters’ assistance. “This effort creates an incredible opportunity for Paden City students by giving them the chance to take college level courses, begin their college careers with courses already complete and at no cost. It just doesn’t get any better than this.”

Tackett added, “The fact that the Paden City Boosters are willing to support academic as well as athletic programs says a lot about the enthusiasm the community has for all aspects of their students’ lives. It certainly makes me proud to have been a graduate of PCHS and a current resident.”

“In the past we have purchased two Smart Boards for our Math Department, a copier for the grade school, and microscopes for science at the high school,” Ferrebee added. “Every year we give our Science Department approximately $1,000 for materials needed in class and also $1,000 to the Art Department for materials for art projects. We are also building a new Multipurpose Building for our school at no cost to the county or state whatsoever. We also support local community entities such as the Paden City Volunteer Fire Department, the Paden City Lions Club and many youth leagues in the community.”

Ferrebee pointed out the boosters support all sports in the school, with each sport receiving new uniforms every four years. “We have a no cut policy in all sports at Paden City and every child is encouraged to be involved in some activity. If they cannot afford the proper equipment, it is purchased by the boosters and confidentially given to the child. The money is never expected to be paid back.”

She further explained, though, that the “philosophy of current officers is that if we ever have to turn down a funding request due to lack of funds, which has never been done in the history of the boosters' association, academics will win hands down over sports every single time. We believe it is more important to help kids in the classroom first.”

The boosters’ proudest accomplishment to date, she said, is paying for every junior or senior to take the ACT test. “We pay for them to take the test one time.”

Ferrebee noted, “As you can see, we take our academics very seriously in Paden City. We are proud of our children, our teachers and our parents for taking such an interest in the future of our children, and are thankful that we can be a small part of their success.”