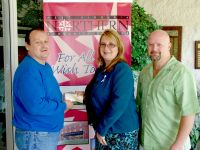 Debbie Bennett, center, office administrator at the New Martinsville campus of West Virginia Northern Community College, and Todd Strickler, at right, nursing student, New Martinsville campus, accept a $300 check presented by David Anderson, at left, of I&D Catering. This donation toward the Erika Bennett Memorial Scholarship was made possible by a dinner that was held during the recent Town and Country Days.

A catering company’s dinner offering at this year’s Town and Country Days in New Martinsville was much more than just delicious—it also served up funds for a scholarship at West Virginia Northern Community College.

I&D Catering and owner David Anderson presented a meal of baked steak, mashed potatoes, green beans, salad and assorted gourmet cupcakes. Anderson said he planned the dinner with the intention of donating a generous portion of the proceeds to the Erika Bennett Memorial Scholarship for WVNCC nursing students.

In addition, it was explained, current second-year New Martinsville campus nursing students volunteered as the waiters and waitresses during the dinner. This is the second year that I&D Catering has served dinner during the Town and Country Days and made a contribution to the scholarship fund.

The family of Erika Machelle Bennett established this scholarship to provide financial support to a WVNCC nursing student. Erika had attended the New Martinsville campus and was planning to enter the nursing program in Fall 2010. However, Erika unexpectedly passed away because of an undiagnosed condition, Churg Strauss Syndrome, a very rare form of vasculitis, or inflamation of blood vessels.

Debbie Bennett, office administrator at WVNCC, said, “The family and I sincerely appreciate the generosity of I&D Catering for continuing the memory of Erika’s giving spirit by contributing to this memorial scholarship fund.”