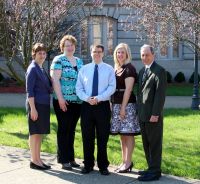 West Virginia Northern Community College, for the sixth straight year, has been named to the President’s Higher Education Community Service Honor Roll. WVNCC is the only two-year institution in West Virginia to be cited on the 2011 listing.

The national Honor Roll is coordinated by the Corporation for National and Community Service and the U.S. Department of Education and honors the nation’s leading colleges and universities, students, faculty members and staff for their commitment to bettering their communities through community service and service learning.

WVNCC and West Virginia University are the only two institutions of higher education in the state to be named to the list each year since the program, based in Washington, D.C, began in 2006.

“Community service is systemic at West Virginia Northern,” Dr. Martin J. Olshinsky, president, said, “and I commend our students, faculty and staff for remaining steadfast in their commitment to voluntarism inside and outside the classroom.”

According to Shannon Payton, Northern’s student activities director, the college participated in numerous community service projects in 2011. Heading the list in terms of numbers of participants and hours spent volunteering were Northern’s annual pledge to the Military Mail Call program, which resulted in more than 18,000 letters being written to military personnel stationed at home and abroad; a major involvement in the Booze, Cruise, You Lose alcohol awareness program for about 400 high school and college aged youth and a Secret Santa program which provided gifts to more than 200 children of students in need.

“I’m proud of the students and staff that continually step up to the plate to fulfill community service needs at our campuses in Wheeling, Weirton and New Martinsville,” Payton said.

Robert Velasco, acting CEO of CNCS, said about the Honor Roll recipients, “Through service, these institutions are creating the next generation of leaders by challenging students to tackle tough issues and create positive impacts in the community.”

“Preparing students to participate in our democracy and providing them with opportunities to take on local and global issues in their course work are as central to the mission of education as boosting college completion and closing the achievement gap,” Eduardo Ochoa, the U.S. Department of Education’s assistant secretary for postsecondary education, said. “The Honor Roll schools should be proud of their work to elevate the role of service-learning on their campuses. Galvanizing their students to become involved in projects that address pressing concerns and enrich their academic experience has a lasting impact – both in the communities in which they work and on their own sense of purpose as citizens of the world. I hope we’ll see more and more colleges and universities following their lead.”

The Corporation for National and Community Service for 2011 cited a total of 642 colleges and universities. Of that total, 513 were named to the Honor Roll, 110 received the recognition of Honor Roll with distinction, 14 were identified as finalists, and five received the Presidential Award. For a full list of recipients, visit www.NationalService.gov/HonorRoll.

CNCS oversees the Honor Roll in collaboration with the U.S. Departments of Education and Housing and Urban Development, Campus Compact and the American Council on Education. Honorees are chosen based on a series of selection factors, including the scope and innovation of service projects, the extent to which service-learning is embedded in the curriculum, the school’s commitment to long-term campus-community partnerships and measurable community outcomes as a result of the service.