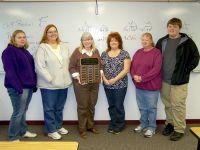 Mary Marlin, third from left, holds the plaque she received for being named the West Virginia Developmental Educator of the Year for 2011. The Shadyside resident is standing with some of her students on the New Martinsville campus of West Virginia Northern Community College. They are, from left, Amber Wilkerson, Pat Roper, Tammy Evans, Donna Mayne and Abe Frohapfel.

A math instructor at West Virginia Northern Community College, Mary Marlin of Shadyside, has been named West Virginia Developmental Educator of the Year.

“This is a prestigious honor for Mary that reflects superbly on the college’s efforts in transitional coursework,” Dr. Martin J. Olshinsky, WVNCC president, said. “The entire college community joins in congratulating her.”

At Northern, it was noted, Marlin “has been instrumental in program development and implementation with regards to increasing student success rates and accelerating course completion for WVNCC’s developmental math students.”

College officials pointed out that Marlin initiated and taught Northern’s first accelerated developmental classes in math. These classes were taught consecutively in one semester, reducing the time students spend in developmental math courses by one full semester. In addition, Marlin successfully piloted an intersession class, an intensive developmental math class of 40 hours during one week, which also saved students a semester of class time.

Marlin designed and conducted Northern’s first ever math boot camp, according to college officials. She also was instrumental in spearheading an ongoing dialogue with area school system personnel, looking at how to work together to identify and solve the problem of underprepared students who enroll in college from high school.

The teacher of the year also routinely provides tutoring services to math students. “No one is more dedicated and motivated to help developmental math students succeed,” Marlin’s nominator said. “Her objective is to help the students succeed and she will always do whatever is possible to make that happen.”