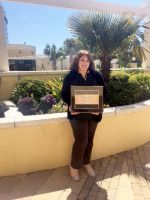 Rita Lyons, graphic arts technician at West Virginia Northern Community College, has been awarded the Bronze in this year’s Paragon Awards contest of the National Council for Marketing and Public Relations.

Lyons, of McMechen, won the national recognition in the Outdoor Media category for the billboard she created as part of the marketing of the college’s new computer information technology program in cyber security. According to NCMPR, this year more than 80 marketing and public relations professionals from throughout the country donated their time to review and score nearly 1,750 Paragon entries from 247 colleges.

WVNCC is the only West Virginia institution honored in this year’s contest which included a total of 92 winning colleges. NCMPR conducts the only national competition of its kind that honors excellence in design and communication exclusively among two-year community and technical colleges.

NCMPR awards gold, silver, and bronze in dozens of categories. Lyons attended the NCMPR annual conference in Charleston, South Carolina, the last week of March when the winners were announced. Bob DeFrancis, dean of community relations at Northern, said, “Rita is an extremely valued part of the college’s Community Relations department. Her award is well-deserved as is the department’s sincere congratulations.”

DeFrancis added, “This is the third time in six years that Northern has won a Paragon. In 2012, Northern’s redesigned website was awarded the Gold Paragon. In 2014, Northern’s graphic artist and webmaster Hilary Curto received a Bronze for a poster she created concerning the school’s no smoking policies. These awards are highly competitive and I am deeply gratified that both Hilary and Rita have received national recognition for WVNCC.”