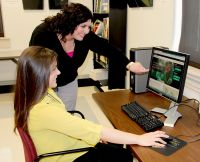 Large numbers of new students needing to pass placement tests or a developmental class to be able to move on to college-level courses has become traditional at most institutions of higher learning. Successful new programs at West Virginia Northern Community College are dramatically turning those statistics around.

A crucial part of a federal grant of more than $1.5 million awarded to Northern in late 2011 targeted efforts to help students more quickly pass placement tests and cut down on the volume of students requiring developmental coursework. College officials point out the ultimate goal is to better retain and graduate more students.

The U.S. Department of Education’s Strengthening Institutions Program, under which the Title III grant is administered, is being overseen by Dr. Vicki Riley, vice president of academic affairs at Northern, and Larry Tackett, division chair of transitional education who also is dean of the New Martinsville campus. They, along with Dr. Martin J. Olshinsky, WVNCC president, are touting the results from the grant’s second year of a five-year program.

Olshinsky said, “Retaining and graduating more students is a statewide imperative, and we are extremely pleased our intervention with this grant is significantly helping students achieve their goals and thereby also impacting Northern’s and the state’s goals.”

Tackett and Riley explained the process involved in implementing the grant’s details. “A program was developed to help students remediate their placement test deficiencies to reduce the number of students needing to take any developmental classes,” Tackett explained.

The initiative, partially begun in 2012, the first year of the grant, was called the Developmental Fast-Track program. “In year two last year, the program was expanded and improved with initial results showing a significant reduction in the number of first-time students needing any developmental class from 73.7 per cent to 51.6 percent which represents, for the fall 2013 semester, 97 students who did not need to take a developmental class,” Tackett said.

Riley pointed out part of the program includes a test-prep component that prepares the student to take the required placement tests. “If students put the work in to complete the modules needed we find they can be successful, moving more quickly into their college careers without the delays often associated with developmental work,” she said. “Many of them ultimately don’t need developmental education in the first place.”

Of the 10 community colleges in West Virginia, Tackett said, WVNCC often has been the institution with the highest percentage of students needing developmental classes. “This significant reduction places WVNCC as one of the schools with the lowest percentage,” he added. Given that one of Northern’s campuses will not achieve full implementation of the program until grant year three, “we anticipate being able to maintain and perhaps improve these results even further,” Tackett said.
Tackett explained the college’s Fast-Track program received the West Virginia Association for Developmental Education’s annual “Most Innovative New Program” award at the group’s fall conference last year.

“The key strategies for activities to be provided by Northern through this grant have made a huge difference in transitional education at Northern,” Riley said, “and there will be more such success since the grant will be with us for two more years and its results will become standard for years to come.”