WVNCC to celebrate their 50th anniversary 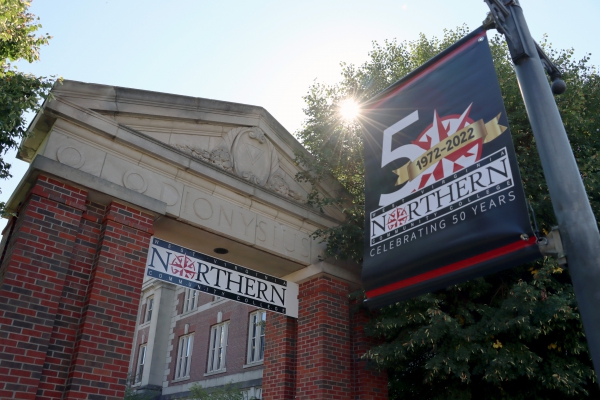 Next week, West Virginia Northern Community College (WVNCC) and its Foundation are kicking-off a celebration nine-months ahead of its 50th anniversary date in May 2022. WVNCC was established on May 9, 1972, when the West Virginia Board of Regents created a dual-campus community college out of what was formerly the Hancock County Branch and the Wheeling Campus of West Liberty State College. The Board specified that the newly created institution was to be a comprehensive community college responsible for educational programs of two years or less duration for high school graduates and adults. Responding to local needs, Northern opened a campus in New Martinsville in 1975 and a campus in Weirton in 1985.

“Since I arrived at Northern two years ago, it seems that everyone I meet has their own Northern story about how the college has impacted their family in a positive way,” commented WVNCC President Dr. Daniel Mosser. “Northern’s 50th anniversary is a great opportunity to pause and reflect on the leaders, students, faculty and staff who have made this college the remarkable community-focused institution that it is today.”

WVNCC will host numerous events and celebrations in the months ahead for its students, community members and employees. For example, on Monday the college will bury a time capsule on each campus with items that were gathered by students, faculty, and staff. Some items include a newspaper from the day of the time capsule burial, a Northern branded face mask, a current college brochure, a letter from Dr. Mosser, Northern swag and more. The time capsule burial will take place on Monday, September 20, on the Weirton Campus, Tuesday, September 21, on the Wheeling Campus and Wednesday, September 22, on the New Martinsville Campus at noon each day. The time capsule will be buried during Northern’s annual Chicken Fest Celebration in honor of their mascot, the Thundering Chicken. The time capsule will be extracted and opened during the College’s 75th anniversary festivities in 2047.

In addition, the college will produce a series of videos and post them on social media each month from people in the community who have been positively impacted by Northern. For their annual Halloween celebration, the college is planning a 1970’s themed costume party on each campus. Then in the Spring 2022, they will host an outdoor movie night with a 1970’s movie that will be chosen by the community. The College has installed new light-post banners on all three campuses featuring their newly designed 50th anniversary logo. WVNCC will be asking the community to help celebrate too, as they deliver a “Party in a Box” that includes party supplies and sweet treats to area businesses and organizations. The College is asking their partners to celebrate with them by posting a photo on social media wishing Northern a happy anniversary.

Anniversary events will culminate with a gala celebration on May 14, 2022, sponsored by the Foundation. The WVNCC Foundation is also launching a year-long “Heart of Gold” fundraising campaign in conjunction with Northern’s 50th anniversary.